In the Dark by Loreth Anne White 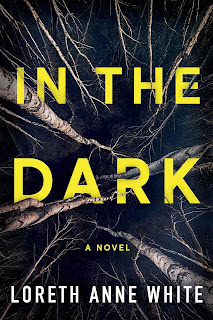 Locked-room mysteries are quite popular among the suspense/thriller genre and no matter how many times I read them I still find them captivating.

In this book the story was set in the secluded high-end wilderness in mountain lodge at Kluhane Bay. Eight guests, including the private floatplane pilot, are invited to the all-expenses-paid trip at Thunderbird Ridge for the "lodge experience" and to decide if they want to put in tenders for long-term contracts; among these guests' field include services like housekeeping, catering, security and a few other expertise according to their profession. One could say it's a perfect getaway with business opportunities and all but the trip didn't start out smoothly even before they fly.

First, one of the guests is sick and couldn't take the trip and when the pilot cross checked his name on the list, she realises that his name isn't even listed. Although this seems a little off, they all proceed without giving it much thoughts, thinking it's a mess up. Then there's the bad weather which leads them for an emergency landing and with no coordinates and connections, they're cut off from civilisation but they do manage to find an abandoned lodge which offers them some refuge.

As they try to settle down and hope that help will be on the way, the pilot has more bad news for the group. It seems someone has tempered with the plane radio and without it, they are all stranded without any way of connecting with the outside world. Fear could induce a person to do something to get out of the unexpected circumstances, but it could also make him brutal and murderous, especially when it appears each of the guest has secrets and something to hide. And when they finally realise that the trip is more of a trap than a getaway, it's a little too late as someone is trying to kill for the things they'd done in the past -- for they're all connected in one way or another.

When homicide cop Mason Deniaud and search and rescue expert Callie Sutton are alerted to the eight missing persons case, they initially think it is simply a plane tragedy caused by bad weather until they stumbled on a few bodies which make them think otherwise. Based on their initial findings, the bodies they found have injuries that indicate they were being stabbed or mutilated. Something had happened at the isolated lodge and they intend to find out what happened as well as to search for the other missing persons. Most of all, are the remainings still alive and if the killer is among them?

In the Dark is kind of a reminiscence to Agatha Christie's And Then There Is None; a book which remains one of my favourite locked-room mysteries. That said, this book stands on its own through its plot and the complexity relationship among the characters as they shared their ugly dark past and in return how each individual's act would play a part in their own tragedy thereafter. The suspense and the execution was quite well done in my opinion, but as it was told in multiple narrations and between the past and the present, some readers may find this a distraction but personally I found this style to be effective. I also liked the interactions between Mason and Callie; their background and the things they'd gone through in their personal life have added some depth to the story and have me hoping if there would be a series featuring them in the near future.

© 2020 Melody's Reading Corner (https://mel-reading-corner.blogspot.sg/), All Rights Reserved. If you are reading this post from other site(s), please take note that this post has been stolen and is used without permission.
Melody at Tuesday, January 28, 2020
Share