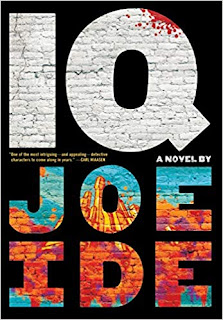 Isaiah Quintabe a.k.a. IQ, is an intelligent young black man who wouldn't mind helping his neighbourhood at East Long Beach in solving cases which the police wouldn't take for a small token of gifts, or whatever his "clients" could offer him. He lives with his older brother, Marcus, and their relationship is close considering they only have each other. But that bond is shattered after Marcus passed due to a hit-and-run and his death leave Isaiah devastated and determined in finding the driver. With this mindset, Isaiah drop out of high school and continues with his investigation gig despite he is good in his studies.

His sidekick, Dodson, is on another different league and it is through chance that bring them together. Their characteristic or moral standards may differ, but funnily they complement each other in a way that makes their so-called investigations work. It is also through Dodson that Isaiah is given his latest case -- a rap mogul who is being targeted and someone wants him assassinated. This won't be an easy case for both Isaiah and Dodson, especially if it involves the hit man's monstrous attack dog alongside with other suspects like a vengeful ex-wife and a few other notorious characters.

Isaiah is an interesting character and he's dependable and straightforward, the boy next door. He's proficient in observing people and things, and together with his logical reasoning he's the remake of the modern Sherlock Holmes, but of course Isaiah is very much on his own and though he's not perfect, he still easily catches a reader's attention through his demeanour and his perspective of seeing things differently. There are two timelines in this story -- 2005 and 2013 in which we'll learn about Isaiah's younger past and his encounter with Dodson while the later year will portray more of his investigations into the rap mogul case. Both timelines are equally satisfying to read and the language used fits the authentic mood amid the tough neighbourhood. This is Joe Ide's debut novel and I'll be sure to check out the rest of this series.

© 2020 Melody's Reading Corner (https://mel-reading-corner.blogspot.sg/), All Rights Reserved. If you are reading this post from other site(s), please take note that this post has been stolen and is used without permission.
Melody at Sunday, March 15, 2020
Share