The Winter People by Jennifer McMahon 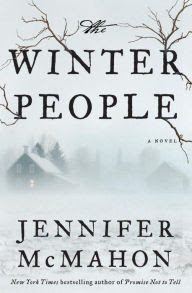 "Everyone in town had a story about the Devil's Hand, and though the stories differed in detail, one fact remained the same: it was an evil place, and bad luck to go there." Pg 59


To begin with, The Winter People is a disturbing, unsettling novel. The cold atmospheric setting, the characterisations and there of course the unsettling storyline.

During the 1900s in West Hall, Vermont, there was a woman named Sara Harrison Shea. She had a happy family with her loving husband, Martin, and a little girl called Gertie. When Gertie was found dead one day, Sara went berserk. Martin tried to do anything to help bring his wife back, but Sara was gone emotionally. She was later found dead tragically one day. Nobody knew what happened; and from then onwards there were rumours that Sara's ghost walks the streets after midnight. The townspeople began to leave offerings on their doorsteps to prevent her from coming inside; and that practice continues to the present day.

Present day: 19-year-old Ruthie Washburne never really believes in West Hall's rumours. Growing up in an isolated farmhouse with her mother, Alice, and younger sister, Fawn, her biggest dreams is to leave her sleepy town and live a "normal" life where Internet and phones are accessible. Life is simple and blissful for them until Alice goes missing one night. Ruthie only found out about her mother's disappearance the next morning since she was out late with Buzz, a boy whom she hangs out with. But that is not all, she also found an old journal belonging to Sara Harrison Shea hidden at her house.

On the other end, Katherine is devastated over the loss of her young son, Austin, and her husband, Gary. Gary died in an accident two months after their son's passing. Katherine found out later that Gary visited West Hall on the day he died so she travelled to that place to search for some answers as to why Gary went there in the first place.

What follows is a series of events that linked Ruthie and Katherine together; and through bits of legends and rumours surrounding West Hall as well as Sara's journal, they find out about the dark, horrific secrets which had happened so many years ago and how some people would do anything to get what they want despite the consequences.

The Winter People has all the elements of a great psychological thriller. To top it off, the characters are all intriguing and the premise just blew me away. I wish I could say what most bothered me in this story but that would spoil everything. Suffice it to say it has a few topics worth thinking and discussing and the author pulled no punches when the imaginative is concerned; one factor which I truly appreciate in a story like this. A very absorbing story and an unforgettable premise; this would no doubt make it onto my top reads in 2016.