Behind Her Eyes by Sarah Pinborough 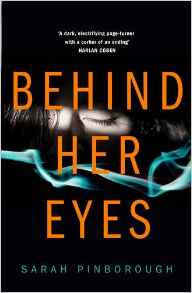 That ending. Alright, I have to confess it was that hashtag #WTFthatending on social media websites which had me moved aside all my fifteen library books and dived straight into this, my purchased copy, and let me just say - this isn't your typical psychological thriller you have read and that once you have started this book you just have to keep flipping through those pages.

So it all began with Louise, a single mom, who kissed a man called David in a bar. They were drunk; and Louise has never fully felt a sense of freedom ever since her divorce until that one evening she had had with David. She enjoyed being with David, even if she knew he is married and that she might never see him again. But she did. In fact, she would be seeing him often at the psychiatric clinic where she is working because he is to be her new boss.

And as if that isn't complicating enough, enter Adele Martin. Adele is David's wife and she is beautiful and elegant. Louise and Adele bumped into each other literally one day and from there it begins their friendship. Louise knew who she is, of course, after all she had seen Adele with David once to meet Dr Sykes, who is the senior psychiatrist at the clinic. Now Louise and David have tried to put that one night togetherness out of their heads, and while Louise is uncomfortable being friends with Adele, she couldn't not be friends with Adele. Not only she has no excuse to end their friendship (well to do so might arouse suspicion) but also there is a vulnerable side of Adele which kind of fascinates Louise. Adele has also asked Louise not to let David know about their friendship and while this perplexed Louise at first, she began to see something is wrong from Adele's speech and behaviours when David is concerned. Her behaviours have left Louise puzzled because the David she knew on their first night is different from the way Adele portrays of him. And as Louise becomes drawn to this odd couple she knew she has to know more about them individually to a point of becoming an obsession.

And from here I have to cease saying more because anything I wanted to say might be a risk of spoilers. This book is dark and is mind boggling. The plot is different from any psychological thrillers I have read and it was original... and disturbing. This is one of those books you have to read for that 'oscillating' feeling as your mind will waver to and from and have you guessing until you will come to realise that you are walking on the wrong path and by then the truth has hit you, hard. I simply had no description for it and well, this probably explains how that hashtag comes about. This is possibly one of the most unsettling thrillers I read this year (and half of the year isn't even over, mind you.)

© 2017 Melody's Reading Corner (https://mel-reading-corner.blogspot.sg/), All Rights Reserved. If you are reading this post from other site(s), please take note that this post has been stolen and is used without permission.