Sometimes I Lie by Alice Feeney 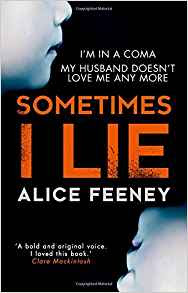 Sometimes I Lie is the second choice of a poll I conducted awhile back and I want to thank you again for helping me with the selection.

In this book, we have Amber Reynolds as our unreliable narrator and she's in a coma. However, readers are able to read her thoughts through her subconscious mind although she remains comatose. We also learn that she hates her job working in the radio industry and most of all, she dislikes Madeline Frost, a well-known radio presenter of Coffee Morning because of the way she treats her lowly and coldly. Amber has also received a verbal warning from her boss that if she hasn't 'reconnect her ties' with Madeline, she'd be the one to leave her job.

Back at home isn't entirely a bed of roses for Amber too as her relationship with her husband, Paul, has gone lukewarm. Worse, she suspects Paul of having an affair and that she is jealous that her younger sister, Claire, is getting chummy with Paul. What with her drab situation and her unhappy adolescence stage, it is easy to see why Amber is miserable and resentful so much so that she wants Madeline to be out of her life.

Narrated in three different timeline 'Now', 'Then' and 'Before'; each timeline chronicles the events and emotionally state of Amber between her current circumstances of being comatose, the incidents occurred at home and at work before her coma and several diary entries respectively. While it was a boldly plotted thriller filled with many twists which had me reeling, I had mixed feelings about this book. Most of the characters here are unlikeable but this is not the main thing which got to me. I think my main issue probably lies with the twists, which was funny (and not to mention unthinkable) since that this element is at times essential in a psychological thriller but it was hard to say it without spoiling it. That being said, it was an unputdownable read and I think this would make a great reading group discussion.

© 2017 Melody's Reading Corner (https://mel-reading-corner.blogspot.sg/), All Rights Reserved. If you are reading this post from other site(s), please take note that this post has been stolen and is used without permission.
Melody at Tuesday, June 27, 2017
Share