Kill the Queen by Jennifer Estep 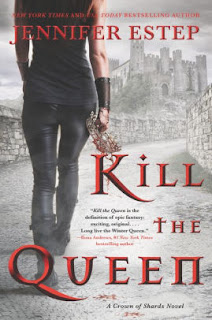 This first novel of the Crown of Shards fantasy series tells a story of a royal family dynamics, politics and conspiracies with the combinations of magic and a hint of romance.

Lady Everleigh Blair lost her parents since young. Although she's seventeenth in line for the throne, her role in the royal court of Bellona is nothing but an assistant to the cook master. In their realm whereby one's magical power determines one's worth (i.e. magier, master and morph), Evie is considered the lowest since she's a mutt with no magical power. Her only strength is her enhanced sense of smell and the ability to be immuned of magic but no one knows of the latter since her late mother had warned her to keep it as a secret for her own good.

Bellona is a kingdom steeped in gladiator tradition so it is not uncommon for a woman to have battling skills. Evie is no warrior, but her cousin Vasilia, who's the crown princess, is a skilled warrior and once upon a time they were close with each other until Evie learnt that it was all a lie. Evie steers clear from her path thereafter, and Vasilia couldn't care less considering she has big plans ahead. Although Vasilia's mother, Queen Cordelia, intends to marry her off to the prince of Andvari for Bellona's benefits and further securing the ties between the two kingdoms; Vasilia, on the other end, has already planned to assassinate the Queen and take the throne by force.

After the massacre, Evie escapes with the help of her secret immunity. For survival and a plan to avenge for the Bellona people, she falls in with a gladiator troupe. While the troupe perform to amuse, several of them are actually highly trained warriors. There, Evie met a few interesting people, in particularly Lucas Sullivan, a magier who seemed to have some secrets of his own. As she trains with the troupe, she soon learn more about the troupe leader, Serilda, who used to be the late Queen's royal guard and how the troupe came about.

I was totally fascinated with the world building and the cast of characters in this book. Add in a dose of magic and some actions and I was hooked. There's nothing that I didn't love about this story; except that Evie may be too much of a risk taker at times. Then again, a warrior is one who shouldn't be afraid to take risks, especially if she has the best of heart for others. I also enjoyed the banter between Evie and Lucas; although there isn't much romantic chemistry between them, yet, I'm hoping to see there's some changes in the next installment, Protect the Prince.

© 2018 Melody's Reading Corner (https://mel-reading-corner.blogspot.sg/), All Rights Reserved. If you are reading this post from other site(s), please take note that this post has been stolen and is used without permission.
Melody at Saturday, December 22, 2018
Share