An Act of Villainy by Ashley Weaver 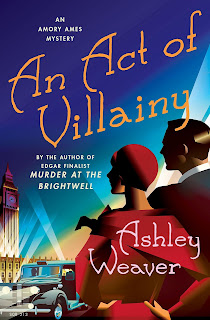 This is the fifth installment of the Amory Ames mystery series. The story opens with our protagonists, Amory and her husband, Milo, encountering an old friend after a night at a theater. Gerard Holloway, former actor and now director, has invited them to the dress rehearsal of a new play he is directing and they have happily accepted. However, when Amory learned that Gerard has cast his mistress, actress Flora Bell, as the lead role in the play, she couldn't help but to feel concern for Gerard's wife, Georgina. After all, they're old friends too.

Amory's concern for Georgina is later cast aside after Gerard told them what has been troubling him lately. Flora Bell has been receiving threatening letters and Gerard thought he could seek their help in finding the mysterious sender; after all the couple had solved a few mysteries in the past. Amory feels torn between her loyalty to Georgina and helping Gerard to investigate but in the end her curiosity gets the better of her; plus she feels the need to bring the culprit to justice.

As Amory digs into the case, she comes to realise that each member of the cast more or less has some issues with Flora and it's difficult to tell if each of them is lying considering acting is their profession. And when the threatening letters turn to murder, Amory and Milo have to find out who the killer is before the final curtain falls.

I've enjoyed reading all the previous installments of this series and this one is no exception. One of the things I like reading about this series is seeing the developments between Amory and Milo. In the first book, we learned that this charming couple faced some marital issues. Milo is known to be a ladies man but so far he hasn't cross the line and has maintained an amicable relationship with Amory. As they work together to solve each mystery their relationship gets better and I'm always curious to read what Milo has in mind during the investigations because he is always so logical and calm while Amory isn't. That is not to say Amory is incompetent but just that their personality and their way of dealing things differ. While I find some parts are repetitive, most often my attention are turned to the cast of characters and how the Ames couple will react when they encounter certain circumstances.

Among other things which I like about this series are the time period and the various settings of each book, with a little touch of Agatha Christie-style so if you like these elements then this series is for you.


© 2019 Melody's Reading Corner (https://mel-reading-corner.blogspot.sg/), All Rights Reserved. If you are reading this post from other site(s), please take note that this post has been stolen and is used without permission.
Melody at Tuesday, April 30, 2019
Share