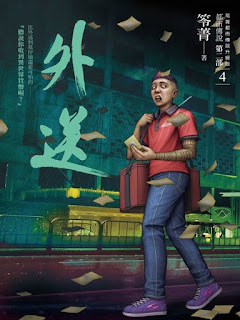 This is book 4 of the second urban legend series by Ling Jing (笭菁). All her books read as stand-alones and her stories are based on various urban legends with some imaginations and other elements of her own.

Note: The main characters in this series are different from the first series as the author felt a change for new blood is necessary to offer a new and different perspective.

Urban Legend origin:  Hong Kong, 1989. An eatery received a food order call and had one of their staff to deliver the food. However, the boss discovered some hell bank notes among the stack of money he'd collected the next day. The same incident happened the following day and thinking the staff was playing a prank on him, he decided to make the delivery himself and had ensured it's genuine money he collected. He kept the money aside from the others but the next day what he found was, as you guessed, hell bank notes. He reported this incident to the police and this led to the discovery of four corpses in the apartment. But what most shocking was although the forensic concluded these bodies had been dead for a week, the food found inside their stomach were recent. And the hell bank notes had the fingerprints of the same deceased. The report later revealed they died of carbon monoxide poisoning.

Summary: When one of the characters encountered the same incident as the urban legend origin, the members of the Urban Legend Society decided that they'd visit the delivery address again for further investigation. However, the place couldn't be found. Before this, there are news of some delivery staff who had gone missing and they wondered if the two are related. When they did find the place again, they discovered there's more than meets the eye surrounding the death of the deceased and their guess is murder. But they didn't realise that they'd stepped into another dimension until later and they've to find their way back or they'd be trapped within forever.

My thoughts: This story was scary from the origin's perspective. Imagine the eatery's boss suspected nothing and have the staff continued to deliver the food, does that mean the case will never surface? Onto the fiction, I think the feature of the other dimension connects well with the urban legend origin. What appeared to be a supernatural event became a horrific murder case and I liked how they're all interlinked and solved in the end. My verdict is, you can never know what humans are capable of doing and in some ways they're more terrifying than ghosts.

© 2019 Melody's Reading Corner (https://mel-reading-corner.blogspot.sg/), All Rights Reserved. If you are reading this post from other site(s), please take note that this post has been stolen and is used without permission.
Melody at Friday, August 09, 2019
Share