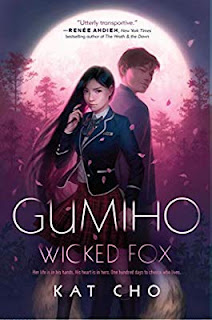 If you're into K-dramas, you should've heard of the drama "My Girlfriend Is a Nine-Tailed Fox", starring Lee Seung-gi and Shin Min-ah. I loved that rom-com fantasy; and it introduced me to this Korean mythology (click here if you wish to learn more about gumiho) although I'm more familiar with the Chinese version of the same creature.

In this book, eighteen-year-old Gu Miyoung arrives in Seoul with her mother for a new life. Being a gumiho forbids them to stay in the same place permanently and for years the two women have no qualm about their hunting life (preying on men on full moon so they could devour their energy in order to survive). Miyoung may have to feed to survive but she has her own rules when it comes to choosing her prey. Through the help of Nara, a young shaman, she captures criminals and the like through Nara's vision and although this doesn't make her less of a murderer, she feels she is doing a justice in some ways.

On a particular full moon night, Ahn Jihoon brings his dog out for a walk and they end up deep in the forest. Jihoon's fear of the dark came true when he encounters a goblin. Just when he thought he'd not come out of the forest alive, a girl came to his rescue. She's none other than Miyoung. However, she'd violated the gumiho rules and lost her fox bead during the rescue. Without the fox bead in her body, her fox essence will deteriorate even though she's holding on to it. 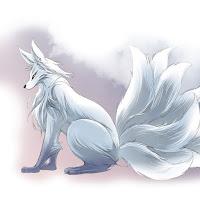 And as fate would have it, Miyoung is a newcomer in Jihoon's school and they're in the same class, too. Miyoung doesn't want to acknowledge him initially, but Jihoon is patient and persistent. He has no fear of this mysterious girl, despite he's heard stories about the mystical gumiho from his grandmother since young. It is no surprise their brief acquaintance became friendship, then a longing for companionship considering they're similar in a way - lack of parental love. However, as much as they're attracted to each other, it is clear that their love is doomed from the start. How could a gumiho and a human fall in love, given all their differences and not to mention a feud which already started decades ago?

There are so many things I loved about this book. The mythology, the characters (hands down, Jihoon is my favourite character among all), the plot and of course not to mention the banter between Miyoung and Jihoon. I also enjoyed the sections in between about the history of the gumiho and her journeys. There's a reason behind her coldness and ruthlessness and these information definitely add a few perspectives to this intriguing story (and I need to mention there's also a glossary list of some Korean words and their meanings at the end of the book for easy reference as the author input them into the story for a more authentic voice). Yes, I was sorry to see it end, but Lark and I had a fun time devouring and exchanging views about this book (and oh, there's a sequel coming in summer 2020! We'll definitely read this together then for our buddy read. Right, Lark? 😃).

1. What aspects of Jihoon's character did you like the best?
His persistence and his easy-going demeanour. Although sometimes his persistence may come off as a little strong, but his intentions are good (e.g. trying to befriend Miyoung despite her continuous indifferent attitude).

2. What did you think of Miyoung's mother and their complicated relationship?
Miyoung's mother was a complicated character. She's cold and she could be ruthless, but after reading some of her past stories I actually felt sorry for her. Her complicated relationship with Miyoung (or Jihoon, for that matter) arises from her past and her fear of history repeating itself. On top of these, her somewhat lack of communication with Miyoung further widen the gap between the mother-and-daughter relationship, although deep down she still cares for her a lot.

There you have it. Now go visit Lark's blog to read her review and the Q&As.  😃

© 2019 Melody's Reading Corner (https://mel-reading-corner.blogspot.sg/), All Rights Reserved. If you are reading this post from other site(s), please take note that this post has been stolen and is used without permission.
Melody at Thursday, October 03, 2019
Share