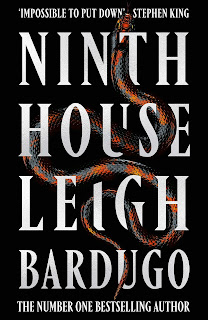 Leigh Bardugo is a well-known author under the YA fantasy genre. This book is her adult debut and the story revolves around magic, ghosts, mysteries and secret societies mostly set at Yale University.

Our heroine, Galaxy "Alex" Stern is an extraordinary character. She is raised by her mother single-handedly and dropped out of school early. Since young, she has the ability of seeing ghosts (or the "Grays" as referred in this story) and was cast as a misfit. The rejections and impressions from her peers led her to a state of self aversion; and this later pushed her towards the shady world of drugs. But bad things didn't stop there, she continued to encounter more dark and brutal incidents until she's given a chance to attend Yale, ironically thanks to her "special" ability.

Yale has several secret societies and each of these eight Houses of the Veil has their own rules and regulations pertaining to their activities. The members are often yield as the future rich and powerful people; but some of the occult activities they perform might not be as simple as one thinks. The League of Lethe is formed as an oversight body for these societies' activities, monitoring the rites and practices of any societies trafficking in magic, divination or otherworldly discourse. Prior to entering Yale, Alex is assigned to a mysterious man named Darlington so as to learn some things about Lethe and the secret societies before becoming a Dante.

But Alex's life continues to be a tough one. Now there's a dead girl on campus and Alex thinks there's more than meets the eye despite the police and campus administration's statement that her death is nothing more than her own bad misfortune. To find the truth, Alex made a pact with a Gray, and soon realise he has one mystery to unravel, too.

Well, this book wasn't an easy read in all aspects (it's filled with many dark and some disturbing issues); and it's even harder to review as my feelings for this book is mixed. I liked the premise; and I thought the characters are intriguing but for some reason I just couldn't connect with Alex. Her life journey, especially her teenage years, was so dark and so sad. I think the main thing that got to me was the slow pacing and the world-building, though interesting, took me a while to get immersed into it. It was long and at times complicating and it was only towards the half of the book did things start to get a little more intriguing and tense but by then I couldn't wait to be done with the book. The ending left the reader with a longing for its sequel and I hope the next book will be better with a faster pace and more showing than telling.


Note: This is a scheduled post as I'm currently taking a short break off of blogging. Comments and blog-hopping will resume once I'm back from my break. Have fun and happy reading! 📚

© 2019 Melody's Reading Corner (https://mel-reading-corner.blogspot.sg/), All Rights Reserved. If you are reading this post from other site(s), please take note that this post has been stolen and is used without permission.
Melody at Thursday, November 14, 2019
Share