Wherever She Goes by Kelley Armstrong 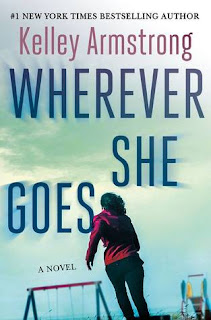 In a nutshell, this latest stand-alone psychological thriller by Kelley Armstrong is about the lengths one woman will go in order to save a child.

Thirty-year-old Aubrey Finch has been separated from her husband and she only gets to see her young daughter during weekends. Her husband, Paul, is a criminal defense attorney and Aubrey works in a library. Despite her financial status, Aubrey never ask Paul for money. This is partly due to self belief that she has hidden her dark ugly past from Paul so therefore she doesn't deserve his kindness and empathy. Her secrets eventually led to a strain in their relationship, although Paul didn't really know about her past until later.

Like any other weekend, Aubrey is spending her time with her daughter at a park when her sight rest upon a young mother and son. They chatted a bit but didn't exchange any personal information about themselves. Two days later, Aubrey saw the same young son wandering alone but before she could reach him, she witnessed a man came out from his car and took him. With the boy's mother nowhere in sight, Aubrey figured it should be a kidnapping case and called the police. The police told her no one has reported a missing child; and while this news sent Aubrey into doubts, she knew something is definitely off and decided to take things into her own hands. Her actions, however, have made the police and the people around her question her credibility and her mental state. Is she an attention seeker? Or is she delusional because she doesn't have primary custody of her daughter so she is losing her mind and start to imagine things? But as Aubrey ignores the accusations and continues digging, she knew there's always a cost and that her continuous digging may put her into danger given her dark past.

Kelley Armstrong is a versatile writer as she writes different genres ranging from young adult novels, fantasy, crime and suspense thrillers. I may not have read all of her novels, but I've enjoyed those that I'd read thus far. This book, however, lacks a little punch partly due to the plot which I find is quite commonly used (which isn't a bad thing but just feel that I've read something familiar at some point). Despite this, I've to say the author has done a great job in portraying a single parent's struggles as well as a mother's fear of losing her child. And of course, there's Aubrey herself with her intriguing dark past and her fighting spirits, which I think made up for the average intensity and suspense.

© 2019 Melody's Reading Corner (https://mel-reading-corner.blogspot.sg/), All Rights Reserved. If you are reading this post from other site(s), please take note that this post has been stolen and is used without permission.
Melody at Monday, December 16, 2019
Share