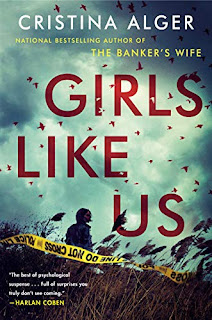 FBI Agent Nell Flynn returns to her childhood home in Suffolk County after receiving news that her estranged father had died in a motorbike accident. Nell has never been close to Martin Flynn since young. Her mother was brutally murdered when she was seven and despite Martin being a homicide detective, the case remains unsolved. The death of Marisol Flynn has further drove their relationship apart, and Nell doesn't want to have anything to do with her father until his death hit her.

Now back at her childhood's home, Nell is once again awash with memories of the past. Thinking that she'd return her life back to normalcy after spreading her father's ashes and closing his estate, she is then approached by Detective Lee Davis as a consult for the investigation of two young women who were found murdered in separate occasions. Before Martin's death, Lee was working with him together on the investigations and he thought perhaps Nell might shed some light given her profession. Nell is actually on administration leave and she knew her superior might hit the roof once he finds out she's involved in any case unofficially, but Nell is intrigued so she accepted his offer.

As Nell digs deeper, she learns that her late father had been keeping some secrets from her and the things that she has found out made her wonder if her father should be the prime suspect. Nell doesn't want to jump to conclusions without solid evidence, but she also couldn't help thinking about her mother's murder and her role in exonerating her father in that case. Is her father a murderer? What really happened to her mother and the two young women? And most of all, what are the motives?

Girls Like Us was a compelling thriller and police procedural that consisted of a well executed plot and well developed characters. Nell was an intriguing character from the start and I found it was easy to connect with her quickly despite her outwardly tough demeanour but in fact she was an introvert and a loner. I actually enjoyed her interactions with Lee, whom I felt was the only person she could trust among all although it took a while for Nell to really open up and shared her thoughts with him, which was no surprise knowing her characteristics. The suspense was a slow-burn, but it was effective with the overall style and atmosphere as the reader follow Nell's investigations through her perspective. I'd had an idea where the route to the ending goes, but the identity of the perpetrator still threw me off. I'm hoping the author will write a series featuring Nell in the near future as she'd left an impression on me.

© 2020 Melody's Reading Corner (https://mel-reading-corner.blogspot.sg/), All Rights Reserved. If you are reading this post from other site(s), please take note that this post has been stolen and is used without permission.
Melody at Monday, January 06, 2020
Share