Someone We Know by Shari Lapena 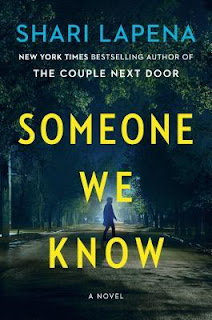 
I've read two of Shari Lapena's books so far and thought they were fast-paced and twisty and this one was no exception, although I didn't like or connect with any of the characters and most of all, I didn't know how I should feel towards the ending -- which borders between sympathy and disbelief.

The book opens with a woman being bludgeoned to death by a hammer. Amanda Pierce was a pretty woman and the residents at the suburb Aylesford are susceptible to her charms, especially the men. When she was reported missing by her husband one day, the police didn't raise too much of an alarm considering there were occasions that Amanda went out of town with her friend until her body was found in the trunk of a submerged car.

Detectives Webb and Moen are called to investigate Amanda's death. Initial speculation points to her husband, Robert, who appears to be a quiet and reserved man but would he kill his wife out of jealousy? Then there are the wives who aren't pleased with Amanda's flirtatious behaviour towards their husbands. To complicate matters, there's been a few cases of a teenager sneaking into people's houses and hacking their computers. Feeling guilty and out of moral consciousness, the teenager's mother sent out two anonymous letters to the homeowners with her apologies. But her act may have opened up a can of worms, for the news of the house breaking have spread within the neighbourhood and many of them fear their secrets might be at stake. How far would these people go to protect their secrets? And is Amanda's murderer hidden among them?

First off, let me just say that Shari Lapena really knows how to write an unputdownable suspense. The chapters are relatively short and this allows a faster and easier read alongside the suspense. However, I've some issues with the characters and how ridiculous the story seems to be as it progresses and then becomes repetitive whenever there's a new suspect and so on. That said, it was still a compelling read although this won't be my favourite Lapena book. There are readers who loved it based from the reviews on Goodreads so I suppose I'm in the minority.