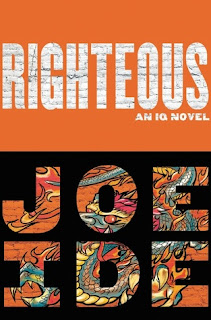 This second installment of Joe Ide's IQ series was packed with more actions and intensity as we follow Isaiah Quintabe's investigation of a new case as well as unraveling the mystery of his older brother's death.

For ten years, Isaiah still hasn't really let go of the news of Marcus's death. How could he when Marcus was a perfect role model and the only family he had had? He's never stopped his search for the driver who was responsible for Marcus's death; and the feelings of rage and despair nearly drove him to an edge until he received a call from Sarita. Isaiah has had a crush on Marcus's girlfriend since he was a teenager. But knowing that she's out of bounds and their expectations differ, Isaiah could only admire her from afar. She has not contacted him since Marcus's death until now and it seems she needs his help.

Janine is Sarita's half sister and they aren't really close. Partly due to physical distance and the difference of mindset, Janine is often portrayed as the "wild" girl of the family. She's given up her studies to become a DJ, but given it's more of a gig so she's been running around clubs and having the best of her time. Her boyfriend, Benny, is a gambling addict and he has owed the loan sharks a number of debts and it seems Janine is in trouble too since she's also into it. There's a saying that love is blind, and this describes Janine's current relationship perfectly as she'd go along with Benny despite the dangers, even if it means going against the gangsters and blackmailing them.

Once again, Isaiah finds himself partnering with Dodson, who is now into food truck business and a father-to-be. Isaiah and Dodson have come a long way and while Dodson has some reservations, he gave in eventually. So their search for Janine lead them to Vegas where they'll deal with various mobs and amid the mayhem Isaiah will unravel the mystery surrounding Marcus's death.

I read the first book and find it enjoyable. This second installment was a lot more fast paced and there were more actions given the plot and the mob theme. While they were entertaining to read, I was more intrigued by the diverse cast of characters and their interactions which made this book such an interesting read. Isaiah continues to intrigue me; and I'm glad to see there's closure and justice pertaining to his older brother's death as this is what troubled Isaiah the most since the first book. I'll continue to follow this series with anticipation.


© 2020 Melody's Reading Corner (https://mel-reading-corner.blogspot.sg/), All Rights Reserved. If you are reading this post from other site(s), please take note that this post has been stolen and is used without permission.
Melody at Friday, March 27, 2020
Share