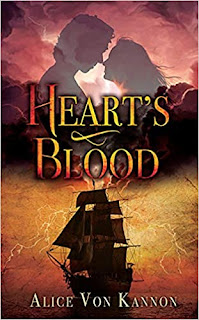 Salem, once known for the terrifying and dark horrors of witch trials, is the setting for this story although witchcraft and the likes are not the theme here. It is 1803 and the Puritan village in Massachusetts is now the wealthiest town in America. Captain Isaac McCallister is well known to the residents in Puritan, but that is partly due to his five harrowing years of slavery in Algiers. Now he is one of the successful tradesmen although the experiences he'd been through still haunts him.

Eleanor Hampton is an eccentric young artist who's living with her mother and sister at Boxwood Cottage of the same village. She's independent and opinionated; but her tough demeanour could easily be misunderstood by others considering she's lost her father a few years back and she has to take on his role to support the family. Isaac's return has rattled her world because he's her father's step-brother and there's been a long-standing bitterness between the two families. On top of it, they've been living on his estate and Eleanor fears he'll claim back what's his and have them evicted. But as much as their heated exchanges and their family feud, Eleanor is drawn by his gallantry and his determination. To safeguard the welfare of her family, Eleanor offers her companionship as an exchange of their settlement but Isaac surprises everyone with his marriage proposal instead. Eleanor initially doesn't care much as she thinks nothing more about romances, but she didn't expect her feelings towards him changes the more they're together and when unexpected circumstances arise which involve a murder, Eleanor knew she will need that determination and courage to face down the threat out of Isaac's past.

Heart's Blood, no doubt is a historical romance, but the setting was well written with lots of background information and this is no surprise given that Alice Von Kannon is an author and historian who's written for both History and the Discovery Channel. Although I enjoyed learning more about the two characters and their dynamics, the pacing was a bit slow from the start but I've to say they're well developed and fleshed out. Isaac's traumatic past wasn't an easy read, but yet it was a crucial part of the story which tells another side of him and how those experiences had altered his path thereafter. I don't think I've ever read a historical romance much like this book which is rich in history and adventures so it was quite a refreshing experience.

© 2020 Melody's Reading Corner (https://mel-reading-corner.blogspot.sg/), All Rights Reserved. If you are reading this post from other site(s), please take note that this post has been stolen and is used without permission.
Melody at Tuesday, June 16, 2020
Share