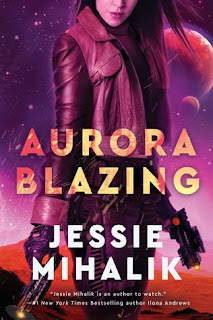 
I was hooked by the first book (Polaris Rising) of this Consortium Rebellion trilogy featuring three siblings from High House von Hasenberg so I dived into this second installment with a high expectation (if you love sci-fi and romance, perhaps you should try reading this trilogy. Could be read as a standalone but I'd suggest reading them in order).

Bianca von Hasenberg did her duty by marrying for convenience and when her husband died unexpectedly, many speculated if she's something to do with his death but in truth, she did nothing but one thing for sure, she's definitely living her life happier and freer than before. However, politics and power will always exist and when their oldest brother disappears after an attack, Bianca decides to search for him despite their father's order and this led him to sending Ian Bishop, the director of House von Hasenberg security to bring her back.

Bianca has a vast of connections, and in no time she's able to trace the links to rival House Rockhurst territory. But Ian is persistent and infuriating like no one else; and of course he eventually caught her after some chase across the universe. Bianca stand her ground in finding her brother, even if it means allowing Ian to follow her around and take charge whenever they encounter some obstacles. But most of all, would she be able to believe in love again after an unhappy marriage?

Aurora Blazing was an enjoyable read in terms of the world-building and the family dynamics in the High House von Hasenberg, but it was a slow burn compared to its first book. However, it was justified considering Bianca's backstory and how she came to be that person today both physically and mentally. Ian was another intriguing character, but he received much lesser attention compared to Bianca, thus adding a sense of mystery around him. Their interactions took up most of the story; and it wasn't a surprise to see that their romance took a while to blossom considering their stubborn and hotheaded personalities. While I still liked Polaris Rising a little more than this book, the characters development and the plot remain as good and I'm currently reading the last book of this trilogy, Chaos Reigning, which features the youngest daughter of High House von Hasenberg. While I hate to see this series come to an end, I'll be curious to know what she has in store next.