When No One Is Watching by Alyssa Cole 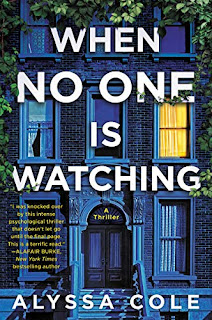 
Sydney Green was born and raised in Gifford Place, Brooklyn. Gifford Place is a cosy neighbourhood where everyone seems to know everyone else and though Sydney's life isn't as rosy, but at least she is happy. That is, until the gentrification begins.

VerenTech, a pharmaceutical giant, has plans to shift their headquarters to Gifford Place and with their vast backups and connections, it wouldn't be a difficult task given a little time and some money to get the residents out of the site. But, Gifford Place has history and most residents, who are Black, are not pleased with their tough approach and this has caused some paranoia and fear among the residents that they'd be chased out eventually.

Sydney is frustrated as she turns her attention towards her walking tour project featuring her beloved neighbourhood. Her new neighbour, Theo, is a mediocre white guy who happens to be her assistant in researching the history for the tour and though Sydney finds him annoying initially, she couldn't help but be attracted by his helpfulness and his sense of righteousness as the days go by. Theo and his rich ex-girlfriend had bought a house together at Gifford Place but they broke off due to personality clashes (but basically because he's a bum); Sydney, on the other hand, worries over her financial status and her ailing mother so it seems they understand each other's plight more than the others.

But as Sydney and Theo dive into Brooklyn history, they soon realise that their neighbours are vanishing one by one discreetly. Did they move out given the gentrification pressure? Or is there an unknown conspiracy theory going on?

This novel was a slow burn but I enjoyed reading about the history of Brooklyn and the interactions between Sydney and Theo. Although classified as a thriller, I think this story comprises a few issues which provide food for thought, such as racism, gentrification and not to mention the division of social status. Alyssa Cole is a romance author so it's no surprise to see some romance elements here. It always delight me to find authors decide to try their hand on writing something different aside from their usual genre and I'm curious what Cole has in store next under the thrillers genre.