Flowers for the Dead by Barbara Copperthwaite 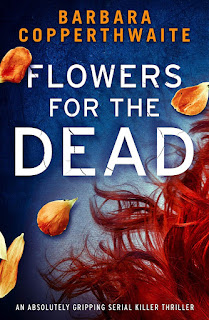 We've read many suspense or crime thrillers which are often based from the victim's perspective but rarely from the perpetrator's. Flowers for the Dead surprised me not only it is a story about the perpetrator but also, I've learnt the meaning of various flowers at the beginning of each chapter.

Adam Bourne is a serial killer who has murdered a few women whom he thinks they're his lovers. Adam would set his eyes on a particular woman, then he'd start to "serenade" her by leaving them flowers, doing their chores without her knowing that she is being stalked. Adam's initial thoughts is to find love through these gestures but what he's done has crossed the line and sent a danger signal to the victims. But eventually the victims always have no chance of saving themselves, because Adam is always one step ahead of them and the police as well. Laura Weir is his latest target, and he intends to make hers his and this time around, he'd make sure that Laura would begin to see his sincerity behind his every moves.

Adam's sinister mind and acts began to take a turn when the reader read about his past as a boy. Unlike the monster he is at present, young Adam was actually a shy boy who had full of love and admiration of his grandmother. Growing up with a father who was always at work and a mother who always belittle and abuse him, Adam sought solace in his grandmother's fairy tales and learned the language of flowers since she loved gardening so much. Through her grandmother's love and attention, Adam was able to endure all the nonsense and abuse inflicted by his mother but his tolerance and his mind eventually snapped after a love confession to a girl gone wrong and that his grandmother passed from a terminal illness.

In many ways, this book read as a crime thriller but Adam's sad past also made this an intriguing case of character study as we watch how little, shy, eager-to-please Adam gradually becomes an obsessive and a frightening serial killer. Adam was, no doubt, a perpetrator but before that, he was also a victim so the reaction towards him wasn't only one-sided. On the other end, Laura Weir and Detective Sergeant Michael Bishop have their own stories as well so overall this was quite an engaging read and of course the best thing to me was, knowing the meaning of flowers.

© 2020 Melody's Reading Corner (https://mel-reading-corner.blogspot.sg/), All Rights Reserved. If you are reading this post from other site(s), please take note that this post has been stolen and is used without permission.
Melody at Saturday, September 05, 2020
Share