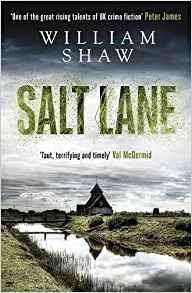 
Salt Lane is the first book in the series featuring DS Alexandra Cupidi, although she has already made her appearance in William Shaw's earlier book, The Birdwatcher (which I'll make sure to get to that book in the near future). In this book, Cupidi is transferred from the London Met police after a scandal which sent her packing to a quiet coastline in Kent. Constable Jill Ferriter is assigned to work with her and their first case is a woman who was found floating in the marsh with her death unknown. Further investigation has revealed her identity but that is only the info they've had. Her name was Hilary Keen.

In another circumstances, a homeless woman knocked on a man's door, claiming she is his long lost mother but vanished before the morning arrives. Just the night before and about the same time the body of Hilary Keen was found. Could this homeless woman be her since the police found out later that they both shared the same name? As if things aren't complicated enough, they found another dead body buried in a slurry pit at a farm. An immigrant labourer who has no ID and top with language barrier from fellow workers, Cupidi finds their investigation at a dead end and the only connection she could link with the two cases is that the location of their bodies are miles apart within the marsh land.

Salt Lane was a great story in many ways. Not only it was suspenseful and well executed, it was equally character-driven and a timely novel as well as it touches on the immigrants issue and the problems they face and how the society view and react as a whole. The relationship and banter between Cupidi and Ferriter was another interesting read and add some perspectives through their detective minds amid their differences, personality or professionalism-wise. A great, engaging first book of a series which I'll certainly follow.


© 2018 Melody's Reading Corner (https://mel-reading-corner.blogspot.sg/), All Rights Reserved. If you are reading this post from other site(s), please take note that this post has been stolen and is used without permission.
Melody at Thursday, August 30, 2018
Share