The Ever After by Sarah Pekkanen 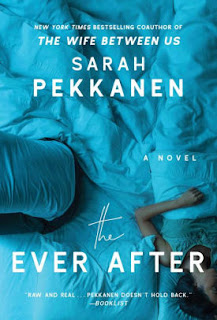 
If you've read The Wife Between Us, you should be familiar with author Sarah Pekkanen as she wrote that book together with Greer Hendricks and it has received positive reviews from many readers. Sarah has also written several books in the past and this latest domestic drama explores a marriage in crisis and a woman's determination in finding the truth surrounding her husband's infidelity.

Josie and Frank Moore have been married for ten over years and live in the Chicago suburbs with their two young daughters. Although their life are hectic and Josie feels burn down by the girls' attention and the domestic life at times, she thinks she is lucky considering Frank is a great father and husband; and that he still showers her with love throughout the years. Until one Saturday morning she borrows Frank's phone to make a quick call and sees an email that shatters her world.

Frank met Dana at a work conference and they have maintained their "friends" relationship for seven weeks. When Josie confronts him about his infidelity, he says they have only kissed twice and nothing beyond that. Josie doubts it, and thereafter set her plan in uncovering Frank's secret by every means.

The Ever After may seem like a domestic thriller but is actually more of a women's fiction and an account of a woman's determination in finding out about her husband's infidelity. While Josie's findings may seem aggressive at times, there isn't much intensity and the pace is rather slow as it is very much focus on her emotional state, her rants and her "investigations". The first part was interesting but the second part was mostly bogged down by her rants and her reminiscent of their past. She is also indecisive if she should move on or take any actions; and once or twice she left her daughters to stay in a hotel simply because she is too angry and she needs to think. At some point I figured I was tired of reading it with the plot going nowhere but plodded along since I was hoping to see some resolution, which to my relief there was in the end. As a first-time reader of Sarah Pekkanen's book, this is certainly not my favourite mainly because I dived into this book with an impression that this was a domestic thriller but it turns out otherwise (I think I'd have liked this more under different circumstances). Then again, it wasn't a bad read as Sarah's writing was engaging and would probably appeal to readers of the women's fiction genre.

© 2018 Melody's Reading Corner (https://mel-reading-corner.blogspot.sg/), All Rights Reserved. If you are reading this post from other site(s), please take note that this post has been stolen and is used without permission.
Melody at Tuesday, September 04, 2018
Share