You Were Made for This by Michelle Sacks 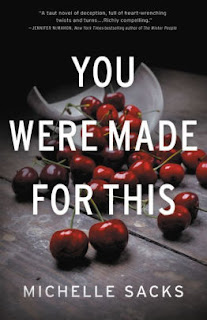 You Were Made for This has a gorgeous cover, but there is nothing pretty about this story as it is a domestic thriller with a cast of twisted characters.

Sam and Merry Hurley left behind their old life and careers in New York to live in Sweden. Together with their infant son, Conor, they are often viewed as the perfect family in other people's eyes. However, behind their pretentious life Sam and Merry each harbours a secret and an ugly past which their other half is not aware of. For Sam, his switching of career from an anthropology professor to an inspiring filmmaker has actually to do with an inappropriate act he had committed in the past and his present infidelity. As for Merry, she feels bogged down by motherhood and the perfect wife image she has to hold and then, there is her past which the reader will get to know as the story unravels. The intensity and thrill only begin when Merry's best friend, Frank, decided to visit them.

Frank (otherwise known as Frances) is Merry's childhood friend. Their friendship is so close that people often mistake them as sisters and Frank doesn't deny about it whenever she is asked about their relations. When Merry heard Frank is going to visit, she is elated. After all, she hasn't seen Frank ever since she has moved to Sweden and she thinks Frank's presence might lighten her boring life. And boy, how her visit would turn the Hurleys' world upside down. Although Merry and Frank are close like sisters, their friendship is also filled with secret envy and jealousy of each other but yet they also complement each other during their own difficult times. When their complications involve Sam, the dynamics among these three take a turn and intensify until tragedy happens.

I mentioned in the beginning that this story has a cast of twisted characters but what most bothered me is each character in this book, including a few supporting characters, have no redeeming qualities in them (well, except Baby Conor and my heart went out to him for what he had been through). I'd say this was rather more of a case of character study kind than a domestic thriller because at some point you'd more or less figure out what'll going to happen but it's the characters who will drive you insane. The ending bothered me too, and after some thoughts after closing the book my verdict was this would be a hit or miss to readers. The writing style with no dialogue marks would either intrigue or frustrate readers, but it didn't really bother me but it did take some time getting used to it. Overall it was an unforgettable story with the characterisations and the ending would make an interesting topic for discussion.

© 2018 Melody's Reading Corner (https://mel-reading-corner.blogspot.sg/), All Rights Reserved. If you are reading this post from other site(s), please take note that this post has been stolen and is used without permission.
Melody at Thursday, September 06, 2018
Share