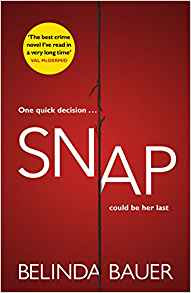 
This is the first book I read by Belinda Bauer and certainly not my last. To begin with, I loved how well executed this story is and how the characters made me feel throughout my reading journey. It may not have lots of twists and turns or a shocking ending which seems to be the current "in" thing for the thrillers genre, but I do miss a good old-fashioned suspense now and then and most of all, how much I rooted for the character despite his flaws and everything.

In 1998, eleven-year-old Jack Bright and his two siblings are sitting in their broken-down car while their pregnant mother left them to make an emergency call. She told Jack to be in charge and that she wouldn't be long. But time stretches and she is still not back. Worried and unwilling to sit in the stifling car any longer, Jack and his siblings decided to go look for their mother and found a dangling receiver at the telephone box instead. Later, they soon learned that their mother was brutally murdered and her body was found. Devastated, Jack's father left home and never returns after the tragedy and once again, Jack is left in charge of his siblings. To avoid being sent off to social services care, Jack and his siblings try to uphold a "happy family" image by giving others impression that their father's working hours are often unstable. With the help of an eccentric friend, Jack masters burglary so as to feed his siblings. Until one day a house he has broken into shake his equilibrium - a knife he is certain which killed his mother is found in the house.

DCI John Marvel used to be a homicide detective but was forced out by a single unfortunate incident that had resulted in the death of a suspect fleeing custody. As penance for his supposed transgression, he is now working alongside with DS Reynolds on burglary cases. Marvel has not given up hope on his so-called demotion yet as he works on the Goldilocks case; in which the burglar earns this nickname by making himself at home before he escape with his loot.

What turns out to be a different thread with no connection takes a turn as the story progresses and this is where the story becomes intriguing. This is one of those books which you've to "savour" it bit by bit as it focuses much on the characters in the beginning (from Jack to the two detectives) but once it hit the crucial part you couldn't put it down thereafter. Alongside the suspense, I also found it to be heartbreaking at times reading about Jack's unfortunate experiences in life. I felt so much for him as well as his siblings, Joy and Merry. Reading about his memories of their mother brought a lump to my throat; and all the more reading how he struggles to make ends meet despite his young age. All in all, this was a great book which I enjoyed immensely. A suspense with a touch of humanity . . . I love this combination and I'm hoping to see more of this in the thrillers genre.

© 2018 Melody's Reading Corner (https://mel-reading-corner.blogspot.sg/), All Rights Reserved. If you are reading this post from other site(s), please take note that this post has been stolen and is used without permission.
Melody at Wednesday, August 15, 2018
Share