Two Girls Down by Louisa Luna 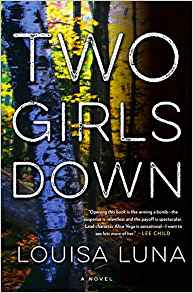 
Jamie Brandt initially didn't have the intention of leaving her two young daughters in the car by themselves. But she had to buy some gifts for the girls' friend party and they were running late. She thought she'd be quick and that they'd be safe in the car at a strip mall parking lot, but she didn't expect that the girls would leave their car and out exploring. A few store assistants and customers had claimed they'd saw the two girls briefly but their statements were vague. The police isn't much help given they are stretched thin by budget cuts and the growing OxyContin and meth epidemics; and with little information about the girls' disappearance, Jamie decides to hire a bounty hunter whose specialty is finding missing children.

Alice Vega is good in her job; she is relentless and she rarely back down from challenges. The police, on the other hand, isn't pleased with Alice's involvement despite they've no leads. Alice already has someone who could hack information for her but she also needs someone who is familiar with the local community and stuff. Enter Max Caplan, who is the former police detective and had resigned from a scandal. He has his own investigative business but the cases are mainly on infidelity affairs and the likes. He didn't take on Alice's offer initially, but after some thoughts and a nudge from his 16-year-old daughter, he finally gave in.

Alice and Max work differently and their personalities may clashes at times, but they form a dynamic duo and they are willing to go to any length to trace the girls' trails. And this is the core of the story as it takes up most of the scenes and read like a police procedural. The descriptions of their findings are quite detailed and I've to say this is the strength of the story alongside the character developments. The banter between Alice and Max was what I enjoyed most of this story and I'm hoping Louisa Luna will continue writing about them as a series.


© 2018 Melody's Reading Corner (https://mel-reading-corner.blogspot.sg/), All Rights Reserved. If you are reading this post from other site(s), please take note that this post has been stolen and is used without permission.
Melody at Monday, August 20, 2018
Share