The Retreat by Mark Edwards 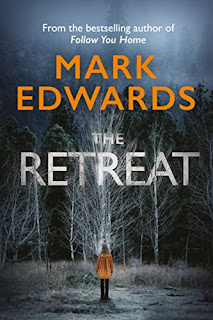 
Set in a town of Beddmawr* in North Wales, this is a story about the disappearance of 8-year-old Lily Marsh and a horror novelist who is obsessed with finding out the truth surrounding her disappearance.

Two years ago, Michael Marsh was drowned while trying to save his daughter at River Dee. According to North Wales Police, Lily had run ahead out of sight and by the time they noticed she was missing, it was all too late. Her toy cat was found floating in the river, prompting Michael to jump in. Since Lily's body was never found, Julia thinks she might be alive and this has keep her moving on. She has then turned their house as a writers' retreat to sustain the cost of living and she has three guests under her roof when horror novelist, Lucas Radcliffe, joins them.

Lucas used to live in Beddmawr when he was a boy; but his real reason for revisiting is that he is hoping to rediscover his voice as he is stuck with his book and what's better place to find peace than your childhood home? However, within days of his arrival, the peace of the retreat is shattered by a series of eerie events. The other three writers claimed they'd heard something - someone's singing within the walls and when they confronted Julia it wasn't her. Then Lucas's pen and mobile phone have gone missing and by that point he was already invested in little Lily's disappearance after Googling the Marsh's family tragedy and he is keen to find out the mystery, to the extent of hiring a private investigator himself.

But Beddmawr is a small community where everyone knows everyone; and to complicate matters there have been legends that a Red Widow in the woods will hunt a girl every thirty-five years and Lily is believed to be one of her victims. Lucas didn't know what to believe yet he couldn't explain the strange things which are happening at the retreat. Yet as he digs deeper, he soon learns that Beddmawr has a dark secret and it might cost him his life should he continue with his investigation.

You know, I love a suspense with a bit of folklore or supernatural element connecting to it and this book was a treat because it was simply unputdownable. This book was haunting not only of the atmospheric setting of a secluded retreat but also how family dynamics, betrayal and superstitious minds could lead to frightening consequences. A great story with a cast of intriguing characters. I'll have to check out this author's work be it new or old.


*  Under the author's note, Beddmawr is stated as a fictional site but if you want to find where it'd exist in map, it's very close to Llangollen in Denbighshire.

© 2018 Melody's Reading Corner (https://mel-reading-corner.blogspot.sg/), All Rights Reserved. If you are reading this post from other site(s), please take note that this post has been stolen and is used without permission.
Melody at Thursday, August 23, 2018
Share