The Invited by Jennifer McMahon 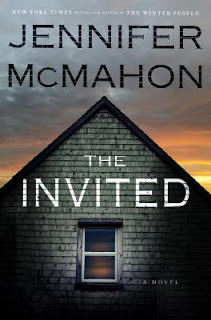 
During the 1920s in Hartsboro, a woman named Hattie Breckenridge was accused of witchery and was hanged. Hattie was merely a woman who had the ability to foresee the future. When she predicted that there would be a fire, no one believed her until tragedy struck. Her daughter escaped since Hattie predicted it and as a result the community blamed Hattie. No one knew what happened to Hattie's daughter after Hattie was hanged and the case was closed but never forgotten.

Back to its present 2015, Helen and Nate left their comfortable suburban home and their teaching jobs to a rural land in Hartsboro where they build the house of their dreams. While they are excited of the project and their new life, their friends think otherwise. Helen and Nate never look back to their old life and immersed themselves in building their dream house. Then Helen discovers that the property they took over has a dark and violent past and this begins her interest and her intensive research.

On the other end, 14-year-old Olive is in search of her mother, who is believed to have ran off with another man. Olive doesn't want to believe in the rumours; she and her mother are closed and she's always enjoyed hearing stories from her about Hattie and her treasures. Her crossing path with Helen leads them to unearth the history of Hattie's tragic past as well as her descendants and how these three generations of the Breckenridge women had all died amidst suspicion; in which both Helen and Olive would find out the horrifying truths eventually.

Jennifer McMahon's past novel, The Winter People, has left a deep impression on me. It was an atmospheric and a creepy story that blends between the 20th century and the present day. The Invited has the same vibe with a sense of a mystery surrounding the ghost story but what stands out is not only the spooky Hattie but also the stories of her descendants and even Olive, too. The story was mostly narrated between Helen and Olive in the present and a few others of the past but the former took up the most narrative of this book.

And as much as this is a ghost story, it's also very much of a family story which spans from three generations, all involving the Breckenridge women. Not intending to spoil the story, all I could say is I was immensely hooked by the mystery. I didn't expect a twist either but there it is. This will be my second favourite McMahon book with The Winter People as my first. Let's hope her next book will surpass these two.


© 2019 Melody's Reading Corner (https://mel-reading-corner.blogspot.sg/), All Rights Reserved. If you are reading this post from other site(s), please take note that this post has been stolen and is used without permission.
Melody at Thursday, April 25, 2019
Share