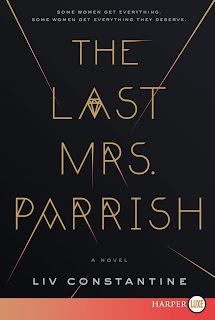 Amber Patterson always feels she's a nobody and she's tired of her life. But, she's had her eyes set on the rich and beautiful Daphne Parrish and she intends to use her as her path towards power and money. Knowing Daphne had a sister who died from cystic fibrosis and has set up a fund foundation in her memory, Amber feigned the same fate with an nonexistent sister with the same illness. It didn't take long for her to blend into Daphne's life, and in no time they become best friends.

But Amber has set her goal far; being associated with the Parrishes isn't enough for her. She wants more and she intends to steal Jackson, Daphne's husband, and be the next Mrs. Parrish. But Jackson is a devoted husband and only has his eyes on Daphne; and then there's also their two young daughters who Amber has to please. Amber has worked out a plan but her past may bring her down if she's not careful.

At its core, this domestic suspense is about obsession and revenge. Divided into three parts, Amber's voice took the first part and Daphne's the second. The last part is written in third voice and wrapped up the overall story. Amber's voice, I think, will irritate many readers because she was passive, manipulative and most of all she didn't seem remorseful. Daphne, on the other hand, appeared more sincere and compliant in the beginning but perspectives started to shift once we get to know more about Daphne as well and unfortunately, this is also when the story started to go downhill.

Having read many suspense thrillers with unlikeable and/or unreliable characters, I think some of their actions or motives could be justified depending on circumstances but in this case I just couldn't fathom the logic and the truth behind the outcome. Suspense-wise, it was not a bad one but the ending left me feeling more than unsettled. I don't agree with the resolution (if one has to call it that) at all and thought that the bigger, underlying issue (trying to be vague to avoid spoilers) should be rectified instead of being deemed as an "accomplishment".

© 2019 Melody's Reading Corner (https://mel-reading-corner.blogspot.sg/), All Rights Reserved. If you are reading this post from other site(s), please take note that this post has been stolen and is used without permission.
Melody at Thursday, August 15, 2019
Share