The Last Widow by Karin Slaughter 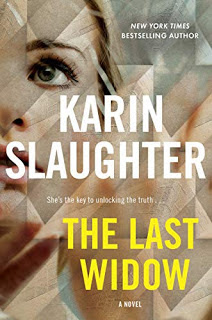 Karin Slaughter is one of the best authors I've come across for writing dark and compelling suspense thrillers. Some of her books aren't always easy to read but she captures the realism and sensitivity behind her stories which will make you think and feel for the characters.

The story begins with a bang with a kidnapping scene. Michelle Spivey, a scientist from the Centers for Disease Control, was kidnapped when she and her teenage daughter were out at a shopping center parking lot. The police are still trying to locate her but to no avail.

One month later, two explosions were heard at Emory University. Situated in the busiest city in Atlanta, there are also hospitals and the CDC within the neighbourhood. The explosions led medical examiner, Sara Linton, and her partner, Will Trent, an investigator with the Georgia Bureau of Investigation, rushed out from their place to investigate the scene. Unfortunately, the explosion incident was simply a conspiracy act to lure Sara out; and in no time Sara was abducted by a team of assailants who has a secret agenda which the reader wouldn't know until later. Devastated, Will approaches his boss and colleague, Amanda Wagner and Faith Mitchell, to devise a plan and hoping to persuade them into allowing him to go undercover in order to save Sara.

As the story progresses, the reader would find out why Michelle and Sara are being targeted by the assailants and the truth will hit anyone's gut because this group of people used to be in paramilitary units and they fight for a cause which they think is rightful and having the power to control. In other words, it's a white supremacist domestic terrorism and the author has painted a frightening world which is not far from realism. As you may have guessed, this is a fast-paced and action-packed story and you'll feel for the characters as you read further. Despite this is the ninth installment of the Will Trent series, it works as a stand-alone. I may not have read all of Karin Slaughter's books but so far I've enjoyed those I read.


© 2019 Melody's Reading Corner (https://mel-reading-corner.blogspot.sg/), All Rights Reserved. If you are reading this post from other site(s), please take note that this post has been stolen and is used without permission.
Melody at Monday, August 19, 2019
Share