My Penguin Year: Living with the Emperors - A Journey of Discovery by Lindsay McCrae 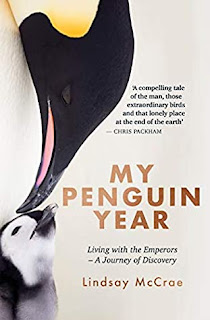 Since young, author Lindsay McCrae has the passion for the natural world. Having grown up in Cumbria on the edge of the Lake District National Park was a privilege to him; and he'd take every opportunity as he could to explore the local woodland and riverbank. By age eight, he had already decided he wanted a career filming wildlife. His obsession with wildlife led him to write a letter to the BBC's British wildlife programme Springwatch when he was fourteen. Springwatch is a series that annually showcases the best of British wildlife and young Lindsay had wrote to them detailing how perfect the Lake District would be for a part of their series. The location was basically his back garden; which was home to badger setts, fox dens, birds' nests and a large pond. His letter even included a map detailing the locations of all the wildlife he'd discovered. Lindsay didn't expect a reply from them and imagine his surprise and glee when they replied to say they wanted to make a little film with him that'd appear on the programme. This experience has further fueled his passion and ambition of filming the wildlife.

Even in his last few years at school, Lindsay would spend every spare moment filming. After leaving school at eighteen, he'd lost his academic motivation and all he wanted to do is watching the outside natural world. Due to his making his Springwatch film and his name had been mentioned so frequently within the BBC Springwatch office, he got a job as a runner. His stint thereafter led to camera-assisting jobs where he gets hands-on experience with professional gear. His career kicked off after a few years and by then he'd travelled all over the UK and had started spending more time filming abroad.

His dream and the opportunity to film in Antarctica came when he received an email from a producer at BBC Natural History Unit. But it wasn't an easy decision for him initially given the eleven-month duration being living in the harsh environment and being apart from his new wife and she being pregnant. But she was supportive although it gave him second thoughts. Then again, he'd already committed prior to the news so there was no option other than to be apart for the birth and the baby's first seven months.

After this introduction of Lindsay's dreams and the various obstacles he'd to overcome before he set foot on the other end of the world, the adventure begins when he recounts his experience filming alongside the lines of emperor penguins and in blizzards at times, as well as the amazing things he'd seen through his work. His musings and observations have made me learned many things about our cute and resilient birds, their habitats and their extraordinary lifecycle, such as they will trek up to 100 miles over solid ice to reach their breeding grounds (and there are breeding colonies which can contain up to several thousand individuals). As many of us know, they've an unusual reversal role whereby the males will incubate the eggs for over two months while the females return to the sea to feed. Aside from the many fascinating sights and experiences mingling with the emperors, Lindsay also shares with the reader about his living base station, the interactions with a few of his colleagues and of course, the technical details and difficulties filming the birds. I've always fascinated by emperor penguins and their lives in the Antarctic so this nonfiction/memoir was a joy to read.

(Here are some pictures I took from the book.) 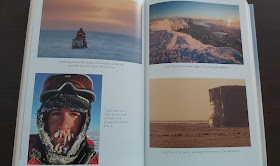 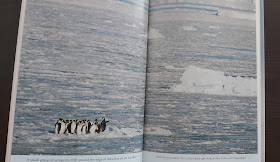 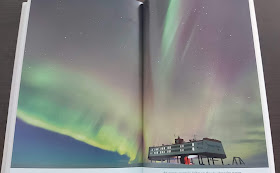 * This is one of the few library books I'd borrowed before the government declared all non essential businesses to be closed and to stay home, practise social distancing and mandatory mask wearing when outdoors. The circuit breaker measures have extended till 1st June given the numbers have not been going down these past few days and we can only hope for the best and that things will get better soon. How are you coping with the current circumstances? Is the place where you're staying reopen already? Take care and stay well and safe.

© 2020 Melody's Reading Corner (https://mel-reading-corner.blogspot.sg/), All Rights Reserved. If you are reading this post from other site(s), please take note that this post has been stolen and is used without permission.
Melody at Thursday, May 07, 2020
Share