This is How I Lied by Heather Gudenkauf 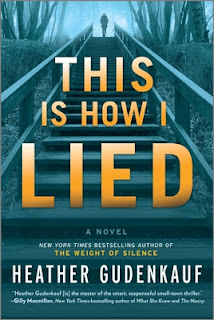 1995, Grotto, Iowa. 16-year-old Eve Knox was found in the caves after her family reported her missing. Based from the injuries of her body, the police suspected she was assaulted and then murdered. Her best friend, Maggie, and her sister, Nola, were the first to discover Eve's body and initial speculation was pointed to her then boyfriend, Nick. The two girls knew about his abusive behaviours towards Eve although Eve had tried to keep mum about the issue. But Nick had an alibi and as much as Nola was family to Eve, her strange characteristic and her obsession in animal dissecting practices easily make her a suspect but there wasn't any sufficient evidence pointed to her either. Maggie's father was the chief investigator who was in-charge of this investigation but with no clues and evidence the case was ultimately left unresolved.

Twenty-five years later, Maggie's father retired and has amnesia. Maggie is now a detective herself and even though she is married and is pregnant with a seven-month baby, it doesn't deter her from doing her job. Maggie has not forgotten about that fateful night and what happened to her best friend so when a new piece of evidence surrounding Eve was found, Maggie knew she has to reopen the case and to find out what really happened to Eve. As Maggie investigates, she begins to encounter problems as not only she receives strange items but also someone tries to burn down her barn. Apparently someone wants her to stop the investigations but Maggie has delved into the case too deeply. Plus, she has to check out something which she'd missed two decades ago.

Told in three narratives between the present and the past, this story explores the complex relationship between friends and family (how much do you know them, really?); secrets and deceptions, as well as teenage angst and abusive relationship. The characters are mostly flawed and while some are sympathetic, I've to say many of them have secrets and thus make the reader hard to like and believe them and this is where there are red herrings, twists and turns because every turn of events will make you change the suspect and have you wondering about their motive. This is my second Heather Gudenkauf book after Not a Sound and both books are compelling and unputdownable in my opinion, though I liked this one a little bit more due to the intriguing characters.

© 2020 Melody's Reading Corner (https://mel-reading-corner.blogspot.sg/), All Rights Reserved. If you are reading this post from other site(s), please take note that this post has been stolen and is used without permission.
Melody at Friday, May 01, 2020
Share