Stranger in the Lake by Kimberly Belle 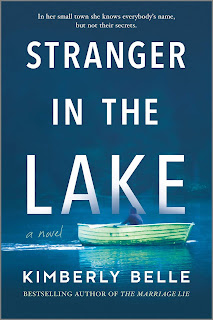 
I've enjoyed Kimberly Belle's previous novel "Dear Wife" so much so that I knew I couldn't miss this latest release by her.

Charlotte used to work as an attendant at a gas station where she met Paul and they fell in love. Paul is an architect who had lost his ex-wife to a drowning accident four years ago. Charlotte's marriage to Paul had caused a ripple of gossip in their small lakeside town; aside that Paul is eleven years her senior, there are also talks about her humble past and his late wife's mysterious drowning which has made people wonder considering she was a skilled swimmer. Charlotte has chose to believe in Paul and ignore the others and of course, it'd absolutely do no good to her baby after she finds out that she is pregnant.

But her inner peace is shattered after she found a woman's body floating around the same spot where Paul's late wife was tragically drowned. Charlotte didn't know the woman since she didn't see her around, but she recognised her talking to Paul the day before. When she questioned Paul about her, he claimed that he didn't know her even though he told the police he's never met the woman, which Charlotte knew was a lie. As much as she wants to cover for Paul and give him the benefit of the doubt, she couldn't help but to wonder about his lie and the reason behind it. How well does she know Paul? And why did Paul travel all the way to an isolated cove to find an old childhood friend, Jax? As Charlotte unravels the mystery upon mystery, she didn't know if she should trust Paul or worse, is he a murderer?

I suppose I'd high expectations of this book after reading Dear Wife and despite the author's writing remains engaging, this story failed to captivate my attention as much as Dear Wife. For starters, I didn't feel connected with Charlotte. The plot was all right, though I felt it'd been done several times and the feel of suspense lessened after I'd a sense where the story is going. Though it was narrated between Charlotte's present and some flashbacks of the teenage past of Paul's and his friends, the development of the latter felt rather rushed. That said, the author's writing is good and I'll look forward to her future releases and reading her older books as well.