The Choice by Gillian McAllister 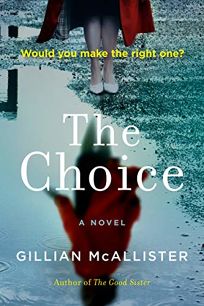 Gillian McAllister's latest release is written in sliding door concept - a dual scenarios depicting the path the protagonist has decided to take after an unfortunate incident.

Joanna and her friend, Laura, are having the best of their time at a bar when a stranger, who called himself Sadiq, invites them for a drink after their casual acquaintance earlier. Joanna didn't mean it to happen, but Sadiq seems eager to chat and when Joanna ignores him, he tries to grab and pull her towards him. Shocked, Joanna doesn't know how to react for a while until she moves away from him. But that isn't all, after Joanna leaves the bar she got the feeling that Sadiq is following her. While hurrying down the staircase she thought she caught a glimpse of Sadiq's red trainers and that's where she makes a snap decision; she turns and pushes him. Only that it isn't Sadiq but a random jogger and he tumbles down the steps and lies motionless, facedown on the ground.

What happened thereafter is two scenarios - "Reveal" and "Conceal", depicts the cause and effect depending on Joanna's choice. If she calls the police, the man will live but that would put her own innocence at risk. She might be charged of assaulting and with no witnesses around, it'd a tough case to fight. But if she leaves quietly and pretends nothing has happened, the man will die but would she be able to go on living with guilt as she lies to her husband and friends?

The Choice was a captivating read that not only the readers will find themselves get caught up by the dynamic plots but will also question themselves at the end in regard to the moral dilemma surrounding this story. While this isn't a typical psychological thriller, it sure is a thought-provoking novel that tells the different consequences through a split-second decision and how it'd change the life between the perpetrator and the victim. While I find this sliding door concept to be a refreshing read, personally I'm not a fan of it as I think it takes away some of the thrill and the focus (the real action of the event somewhat feel lost to me, if that makes sense.)

Character-wise, Joanna didn't really leave a deep impression on me since I didn't really feel connected with her (maybe it's the concept) but I did feel what she'd gone through with both scenarios. That said, I'd still recommend this book if you love this kind of concept.

© 2020 Melody's Reading Corner (https://mel-reading-corner.blogspot.sg/), All Rights Reserved. If you are reading this post from other site(s), please take note that this post has been stolen and is used without permission.
Melody at Monday, June 01, 2020
Share