The Suicide House by Charlie Donlea 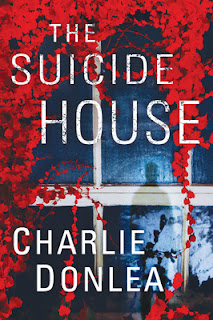 
Forensic reconstructionist Rory Moore and her psychologist partner, Lane Phillips, have made their first appearance in Charlie Donlea's previous novel, Some Choose Darkness. While this is the second book of the Rory Moore/Lane Phillips series, it could be read as a stand-alone.

On 21st June 2019 in Peppermill, Indiana, two students are found brutally murdered at an abandoned boarding house situated near the prestigious Westmont Preparatory High School. The boarding house is a popular late-night hangout among selected students who are invited to participate in some sort of a dare game so as to earn recognition and carry on the "tradition" to the next batch of unsuspecting juniors. Initial investigations led the police to suspect Charles Gorman, who is the students' chemistry teacher after they found his manifesto detailing what he'd do to some of his boisterous students. But before the police could take further actions, Charles commits suicide but ended up in a vegetative state. Without an affirmative statement, the police shut the case based on his manifesto although some questions remain unanswered.

The case is later picked up by Mack Carter a year later for his podcast channel he called The Suicide House and it has since attracted many listeners to discuss the theories and conclusions about the discoveries made during the episode to the Internet and social media. Journalist Ryder Hillier intends to piggyback on the success of Mack's podcast and pull him in onto her plan to work together; after all she had sounded the alarms first and had done her research and posted all her findings in her true-crime blog. But just as they thought they've found a student who was present on that fateful night, he is later believed to have committed suicide before they could get anything out from him. Earlier, there were two students who had done the same near the boarding house and with so many puzzling threads floating around, this is when Rory and Lane come into the picture to look into the case which seems to be related to the two gruesome murders a year ago. What really happened on that fateful night a year ago and what dark secrets lie inside the walls of Westmont High?

Be prepared to take a wild reading ride in this psychological thriller because there's a lot of stuff going on here. There are multiple POVs and characters alongside Rory and Lane; then there are flashbacks and journal entries which dictate the perp's inner thoughts and not to mention Rory and Lane's findings. However, the reading experience got better once I was into the story as I find they're all nicely linked and it was good to know each respective background though it could be confusing initially. While it wasn't hard to guess the perpetrator in the end, the strength of this book lies in the dark and foreboding atmosphere as well as the author's engaging writing style. I look forward to reading more of this series.