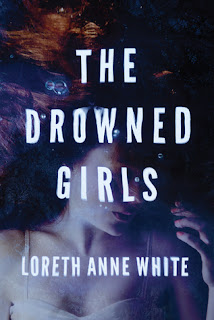 Montlake Romance | June 2017 | 523 pgs
Source: Purchased
This is the first book of a series featuring Detective Angie Pallorino. I've read two of Loreth Anne White's standalones and really enjoyed them. There's something about her writing and she pay attention to the details which add depth to her stories.
Detective Angie Pallorino would never forget about the perverted rapist, who is still at large, had violently mutilated his two victims years ago by etching crosses onto their foreheads after sexually assaulted them. Alongside the pain and regrets is the loss of her working partner who had died while they handled a domestic abuse case which had gone wrong. Despite anything, Angie is keen to prove to anyone that she still has the drive and determination in moving to the male-dominated homicide unit. Angie may be goal-oriented and fearless, but she do have some issues which make her vulnerable and want to be in control. With a schizophrenic mother and the loss of her partner, Angie numb herself through anonymous sex. And this situation leads her to meeting James Maddox, who later turns out to be her temporary partner for a joint investigation task after two more victims are found; both sharing some eerie similarities of her earlier unsolved rape cases.
As Angie's private life collides with her professional ambitions, she is more determined to put that night behind her but Maddox, on the other end, is intrigued by this mysterious woman who had left an impression on him. Angie doesn't want him as partners, but he plays an important role in her job evaluation and most of all, she wants to solve the cases badly, especially if the perpetrator might be the same one she's missed earlier. As their search for clues and the killer intensifies, so does their desire for each other although Angie is in denial given her traumatic past.
There's a lot going on in this story and there are layers amidst layers before the big reveal comes. As mentioned before, the author pay attention to details and this includes not only the characters development, their inner thoughts and the investigations but also the graphic descriptions of the violent and grotesque crimes mentioned. While this isn't one I'd recommend to the queasy or faint-hearted, from the other perspective it adds authenticity of a true crime.
Angie and Maddox have their issues, too. Both are flawed characters and from a romantic angle, I enjoyed reading about their exchanges and how they managed to overcome their own demons through each other. I can't say I enjoyed the brutality of this story, but I do love the characters and how everything unravels towards the end, including Angie's secret past (which I chose to be vague for your own book-unveiling). Meanwhile, I'm eagerly awaiting for the other two installments to arrive.
© 2020 Melody's Reading Corner (https://mel-reading-corner.blogspot.sg/), All Rights Reserved. If you are reading this post from other site(s), please take note that this post has been stolen and is used without permission.
Melody at Tuesday, October 06, 2020
Share