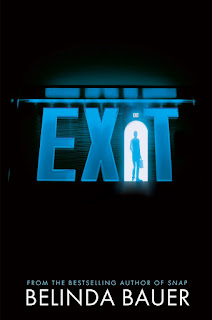 Grove Atlantic | 2 February 2021 | 336 pgs
Source: NetGalley
75-year-old Felix Pink is retired and widowed for more than a decade. Having lost his son as well, Felix's only companion is a dog called Mabel. To keep himself busy and occupied, Felix becomes an Exiteer. It was an unusual job albeit being a not-so-lawful one. To put it clearly, an exiteer simply needs to sit with terminally ill people as they die by suicide, assisting them with logistics and moral support. After they passed, the exiteer would remove the evidence so that anyone is not implicated in the death. Felix's latest assignment is an elderly man living at No. 3 Black Lane. Alongside with him is a rookie called Amanda who's in her early 20s. An exiteer job usually works in pairs and while Felix finds Amanda is too young and inexperienced to perform such a "heavy" job, he has no choice and no say in anything considering he's merely a person who's doing his job, too.
Felix would soon figure that Amanda's age would be the last thing on his mind, for they later realised that they'd made a huge mistake by assisting the wrong man. As Felix finds himself on the run from the police, he couldn't help but to wonder what has turned wrong during their duty. Surely it was a terrible mistake, but what if someone has meant it to be a murder?

I was enamored by Bauer's previous novel, Snap, and found it to be a well-written and a well-executed crime novel with a little touch of humanity. Her characters are so real that they seemed to jump off the page, and despite knowing that Felix's choice of job may not be recognised by everyone, I couldn't help but to feel sorry for him due to what he's gone through and most of all, his thoughtfulness not only to all people in general but also to his dog, Mabel, which he fears she'd be left on her own should anything happen to him. As much as this is a character-driven story, I'd say the suspense and the intensity are equally on par plot-wise and it took me by surprise everytime a layer of intrigue is revealed till the whole picture is fully presented. This latest release by Belinda Bauer has made me her fan and I'll be sure to check out her future releases.

© 2021 Melody's Reading Corner (https://mel-reading-corner.blogspot.sg/), All Rights Reserved. If you are reading this post from other site(s), please take note that this post has been stolen and is used without permission.
Melody at Tuesday, January 05, 2021
Share