Djinn Patrol on the Purple Line by Deepa Anappara 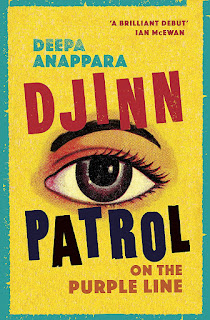 Set in India at a basti (slum) consisted of the Hindus and the Muslims community, this story gives readers more than a glimpse about the various struggles of the residents living there as they go on with their lives. At its core of the story is 9-year-old Jai and his two friends, Pari and Faiz, whose lives are about to take a turn after learning the missing of their friend, Bahadur.

Jai is a fan of many reality cop shows so it's no surprise that he's decided to find Bahadur through the few things he'd learnt from those shows. Together with Pari and Faiz, they search the neighbourhood, the night bazaar and even travel on a railway at the end of the Purple Line regardless of the dangers lurking around. They know they might get lost, or even meet up with the wrong people should they are not careful, but they're unstoppable especially Jai, who believes that their friend could be found through their persistency. But when more kids begin to disappear around their basti, they soon realise that they're both powerless and helpless with their poor situation and the indifference and corruption of their local police system. Division between the Hindus and the Muslims community widens as their distrust of each other arises since they could find no answers regarding the disappearance of the children. Intersperse with the mystery is the children's belief of the djinns and a vengeful woman ghost who look out for the girls from the perpetrators after her daughter died and the killer was never found. Whether if they're true or merely urban legends, Jai and the other children find some hope in these stories amid the sad reality and chaos in their little settlement. When tragedy hits home after Jai's sister is missing, Jai and his family's life would never be the same alongside with the other families who have lost their children.

Deepa Anappara's writing was engaging from the beginning as she vividly described the (unnamed) slum and the residents' living lifestyle through Jai's eyes. Despite the saddened mood of a slum, Jai's narrative was often light-hearted and there were times their conversations were a little humorous, too. (Unfortunately my copy didn't come with a glossary list of the words they used so half the time I'd to guess or Google them myself.) The story could get a bit repetitive surrounding the missing children and how Jai was trying his ways to find them, but I came to understand the purpose as the story progresses as it highlights their helplessness as there's a social status difference between the rich and the poor, and how this division will colour the lens of justice and other things as well. This was a coming-of-age story, but it was also a heart-rending story based on hard facts about the missing children in India, gender discrimination and the social divisions that lead to some inequalities.

Last but not least, I want to thank bookblogger and friend, Lark, for reading this book with me (check out her review here). Here's her questions to me:

1. What did you think of the ghosts and their stories? And why do you think the author included them?

Ghost stories, urban legends, myths . . . we're all fascinated by them not only because they're mystical but in some ways there might be some truths in them. Take an example of the vengeful woman ghost, Junction-ki-Rani, in this story. Her story is true to the children in this book and they think her existence acts as a balance to the injustice they face in reality, as they believe her ghost was looking out for them as she searched for her daughter's murderer. I think the author was trying to portray the hope of the children amid their situation and the unfairness of all.

2. From roti to gulab-jamun, the author describes a lot of street food in this book. What's your favorite kind of 'street food'?

I love street foods. You can learn a lot about a country's culture through their foods and I think street foods represent a significant part of urban food consumption and the lifestyle of the country citizens. I've too many favourite street foods to list; and I love exploring them when I visit other countries. My most memorable street foods experience was in Taiwan. One of their famous street foods is stinky tofu and you can smell them even from a distance. I tried one eventually but I'd to pinch my nose to eat it (the taste wasn't that bad actually.) And well that'd be my first and last time to eat the stinky tofu.

© 2022 Melody's Reading Corner (https://mel-reading-corner.blogspot.sg/), All Rights Reserved. If you are reading this post from other site(s), please take note that this post has been stolen and is used without permission.
Melody at Sunday, January 23, 2022
Share